It’s a blustery winter’s day when Ian McFadden, 49, catches a train from his parents’ farm in Benalla to Melbourne for the operation that could dramatically improve his life. Fatigue prevents him driving himself, a minor complaint when he’s had to give up his career as a helicopter pilot and aircraft engineer in Australia and Fiji because of Parkinson’s disease. McFadden was in his early 40s and living in Tamworth when the symptoms began, the most noticeable being an uncontrollable tremor when he yawned or was anxious.

He was working for the Westpac Rescue Helicopter Service at the time, even receiving a bravery medal two years earlier for his part in rescuing 22 crew from the stranded Pasha Bulker during a storm in Newcastle in 2007.“That was a great time of my life, very challenging, very exciting, a lot of fun, good people, very rewarding,” McFadden says. He recounts his journey sitting on a couch in his brother’s tranquil inner-city apartment, his body stiff and his face devoid of emotion.

Parkinson’s disease can present at any age, but it is most prevalent in later life, affecting about 1 per cent of the population over the age of 55. McFadden is one of an estimated 70,000 Australians affected and particularly young. He hopes Melburnians will take part in “A Walk in the Park” from Fed Square next weekend to help raise funds to advance the search for a cure.

Life for Parkinson’s disease sufferers is a constant seesaw with medication that has to be taken every three hours to stop the rigidity, causing debilitating side effects such as tics and involuntary movements that McFadden calls the “wobbleheads”.

But unlike the Hollywood actor, who had a rudimentary operation back in 1998 and has ruled out further brain surgery to treat his condition, McFadden has decided to put his faith in deep brain stimulation (DBS). 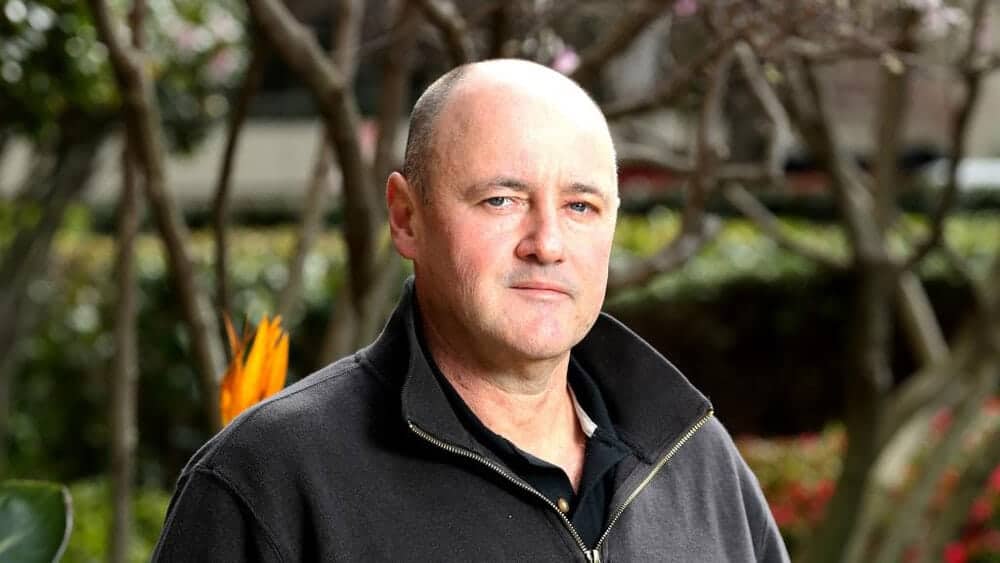 It has taken 12 months to get to this point, with lots of tests and examinations and eye surgery to remove a piece of metal that would have interfered with the magnetic resonance imaging (MRI) that is crucial for the operation.

His neurosurgeon, Professor Richard Bittar, who has performed this operation more than 400 times since 2004, says the aim of the surgery is to improve McFadden’s quality of life.

“He’s a good candidate for the surgery, so we are very optimistic that we can help,” he says. “We want to see his motor function improve, we want to see him less wriggly, we want see him more stable, requiring less medications, able to get better use out of his hands. What we don’t want him to do is to have complications.“Every time we operate on the brain there are risks of bleeding, infection, stroke, epilepsy and a risk of dying. That is why we don’t do surgery at the drop of a hat.”

In the pre-operative room, McFadden’s shaved head is swabbed, almost saturated, with antiseptic solution and local anaesthetic is injected before Bittar fits a metal frame around his head. The neurosurgeon carefully screws bolts into four points around McFadden’s head until they make contact with the skull. It looks brutal.

“We’ve already got a MRI scan, so we’ve got a picture of his brain in some detail, the trick is to be able to put that picture into the same virtual space as his real brain, and that is what the frame allows us to do, the frame is the link between his brain and the pictures of his brain,” Bittar explains.

“We can plan on the MRI scan, like you would plan on your GPS system to end up in a street in Perth if you wanted to drive there. The frame effectively is the car that takes you there.”

The target is the subthalamic nucleus, a tiny area about 4-6mm in length.

“This area has a variety of functions. It is involved in movement and that is why it is a good target for Parkinson’s disease, but it also has functions that involve mood and thinking, so we have to be careful,” Bittar says. The term deep brain stimulation is a bit of a misnomer.

“The whole idea is that we are shutting down an area,” Bittar says. “So even though it is called deep brain stimulation, we are not stimulating the brain, we are actually shutting it down, and we are doing it using a high-frequency electrical current and it shuts down the nerve cells in a very small volume around the contact on the electrode and we can adjust the stimulation, so we shut down a few nerve cells, or we can shut down more.”

A team of people surround McFadden’s bed to take him to radiology for a CAT scan, another type of imaging that complements the MRI to ensure the accurate placement of the electrodes.

By the time McFadden is taken into the operating theatre he’s drowsy from the intravenous sedative, but he will be awake for the first half of the operation.

“By doing it awake we cannot only see that we’re in the right area to improve his Parkinson’s, just as importantly we can make sure we are not in an area that’s going to give him other side effects,” Bittar says. There are at least 11 people in the operating suite, from the anaesthetist, surgeon, specialist nurses and radiographer to neurologist Andrew Evans.

“It is probably one of the operations that has the greatest number of people in theatre,” Bittar says.
A sterile field is set up around McFadden’s scalp, his skin is swabbed and Texta marks are made on the left and right sides of the brain.

The incision on each side is about 6cm long, the skin is peeled back and held in place by special clamps, a plastic tube is slipped under the skin between the openings and then the drilling begins. The noise reminds you of the dentist’s and it’s slightly gruesome to watch as holes about the size of 5c pieces are created.
The coordinates from the MRI have been checked and rechecked. They are checked again, before Bittar inserts the first lead on the left side.

“This process takes some fine tuning using coordinates. We have to avoid areas where there might be blood vessels and avoid the ventricles, which are black fluid-filled areas in the middle, because that can cause a deviation, an error in targeting.”
Bittar asks McFadden to count backwards in sevens from 100, a task he performs with relative ease.

The sound of neuron activity is recorded and the team listens, waiting for the sound of “rain on a tin roof” — as Evans describes it — to fill the operating room, confirming the electrode is in the right place.

“We do a neural recording first … assessing the effects potentially on rigidity, stiffness and slowness, as well as possible tremor, and then agree we are in right spot,” Evans says.

“There is always a little bit of wriggle room, the electrodes are designed so that you have longitudinal wriggle room.” Evans is on the other side of the surgical barrier interacting with McFadden as Bitter places the electrode.

McFadden snaps his thumb and finger together as requested and then Evans takes his hand and flicks it back and forth. It’s miraculous to watch, the transformation from rigidity to flexibility, as the electrode is incrementally moved.

Evans says there are more sophisticated electrodes in the pipeline that will allow “shaping”. “So that instead of just being rings, there will be dimples, divided up into quarters where you can send the current in one direction and better shape the field to stimulate the areas you want, and minimise spread to other areas.”

Once Bittar and the team are satisfied the left electrode is in the correct place, the surgery is repeated on the right side of the brain.

Special caps have been fitted into the holes in the skull and the lead on the left hand side of the brain is threaded under the skin so that both leads will come together and fit snugly behind the right ear and go down to the neurotransmitter that is embedded under the skin in the chest like a pacemaker. He says that on average, 60 per cent of DBS patients are able to reduce their medication down from five intakes a day to two. “The other benefit is that medication doesn’t work overnight, whereas the DBS does,” Evans says. Five days later and McFadden is back at brother Geoff’s place recovering.

“He’s in pretty good nick,” Geoff, a professor in the University of Melbourne School of Biosciences, says.

“His head doesn’t look real good, that will heal up apparently — it looks like he’s been dehorned. I think the relief last Thursday night for everyone was huge. It has been a long, long ramp up, with hiccups and hurdles. And to get there and get the whole lot done…now he is ready to resume his life, hopefully.”

McFadden says he has already decreased his medication by 50 per cent: “I’m very optimistic. Even on the (operating) table I could feel the benefits already, the tremor and the rigidity and the pain in my right arm went away.”

Life might not quite be a walk in the park from here, but he’s made a step in the right direction. A Walk in the Park, 4km, August 28, 11am, Fed Square. There are also walks at Mildura, Warrnambool, Bendigo and Albury/Wodonga.

This article was originally posted in Herald Sun